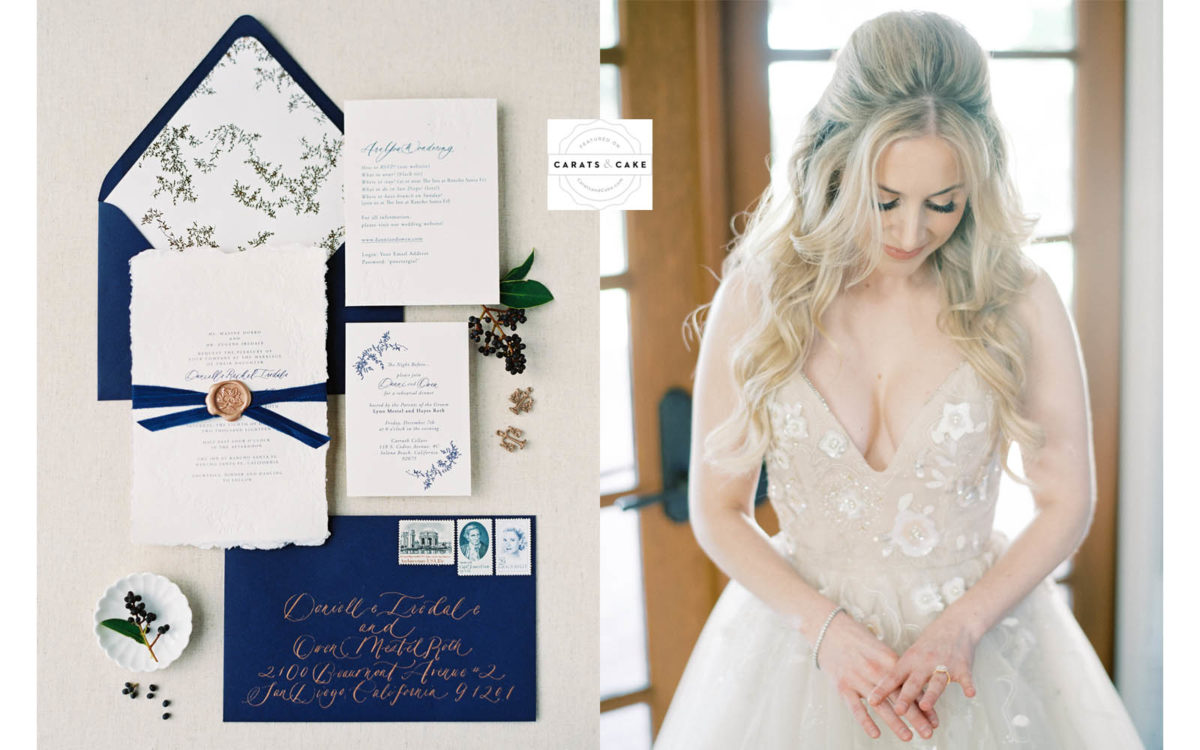 Danni and Owen, what a fun couple! Believe me when I say that Danni and Owen’s wedding was one filled with not only love, or ahava, but also devotion, tradition, beauty and FUN!

As mentioned in the feature on Carats and Cake, this real wedding took place at the beautiful Rancho Santa Fe Inn in North County San Diego. Haute Fetes was behind the romantic design and Planning. As if the Inn isn’t gorgeous enough on its own, it was then dripping in white florals, and navy and gold accents. The day spoke a lot about who Danni and Owen were not only as individuals but also together as a couple. They celebrated their love with tradition, religion, and lots of beauty and fun. They embraced their religion by being married by a rabbi, signing the ketubah before the ceremony and ending the night bouncing through the ballroom on chairs while their friends and family sang their hearts out.

Surrounded by some super supportive friends and family from all over, Danni took on the appearance of a princess, just like she had dreamed up. She wore a breathtaking, low back, floral ballgown, had romantic curls in her hair. For gher makeup, I glamorized her best features. She has beautiful big blue eyes and that’s the feature we agreed needed to ‘pop’! I added some big, wispy lashes, a refined black lash line, and stuck to a neutral palette on her eye lids. Her bone structure was highlighted and I used a natural peach tone on her lips, so that all the drama was on her eyes. She truly looked like a princess! Her bridesmaids all wore their hair down in some way and navy gowns. I kept their individual looks natural as well, using earth tones and enhanced their best features much like I did with Danni. The groomsmen wore classic black suits and bowties, but to make his own look ‘pop’ much like Danni’s, Owen wore this rad black velvet suit jacket that spoke volumes.

What strikes me the most while scrolling through these captivating photos by whiskers & willow photography is the authenticity. You can literally see the love that these two share and the joy that this day brought them. You can only hope that these memories stay with them always and they joy they share can be spread like wildfire to everyone they touch in their lives, which by the looks of this wedding, is quite a lot of people! Wishing these two so much ‘ahava’ as they dive head first into the next chapter of their life together… the secret’s out… They are expecting!